MAGIC ON OUR HOLY PROPHET (PBUH) 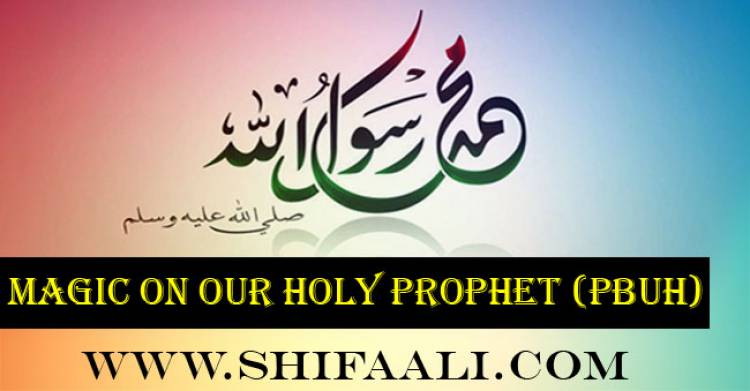 MAGIC ON OUR HOLY PROPHET (PBUH)

The Jews tried to spell over the holy prophet (PBUH) after the defeat from every said because their profane plans always proved unsuccessful.

its is narrated by syeda Ayesha sadiqa R.A that a person from the tribe of banu-zareeq spelled over the holy prophet (PBUH) and because of this magic the condition of the holy prophet was that you started to feel that every work is done but infect it was incomplete. She tells that one night the holy prophet (PBUH) was with me and he prayed to Allah Almighty and said O ayesha (R.A) do you know Allah has told me something ?

Two person came to me and one was standing at my head side and the other at the side of feet. one asked to man has ? other replied, He is spelled over by someone. First person asked at which thing he did the and who is that cursed person ? The second man replied Lubaid bin asim did this and at the heir in the comb and at the dry bark of a date. First man asked where do these things can be found ? in the wall of zarwaan, other replied.

The holy Prophet went to the zarwaan wall with his companions. The Holy prophet said wall was as red as mehndi, and the cops of the date three ware like devils head. than why Ayesha relates i asked out of this ya rasool Allah ?

Allah gave me recovery and i do'not like to spread this bad things among the people. whit the soil that wall was filled by your order.
(Sahi Bukhari)

MAGIC CAN BE SPELL OVER ANYONE.

All the saints and sufis of the world can not understand the greatness of a sahabi who just for one moment sighted the Holy Prophet (PBUH). Allah the Prophets can not understand the status of holy prophet (PBUH) if the magic can spell over the grate prophet then it can great prophet then it can be at anyone. if he is very honest and piest it does not matter. if some one thinks with tahajud how can the magic spell over at me ? it is his illuion it can at yourself although you are very priest and honest.

MIND AND BODY CAN BE EFFECTED BY MAGIC.

in the upper converation according to Syeda Ayesha (R.A) it is clear that the magic was affecting the mind of Holy Prophet (PBUH). sometime you feel that i have done this work but indeed it was not done by you. According to some conventions it is stated that this magic was spelled over in order to destruct you (Noouzbillah). By this narration is clear that the Holy Prophet (PBUH) was worried due to this magic.

it is the symbol of your mortality that a human being can be influenced by the magic.

PROFANE PLANS OF JEWS FOR MAGIC

it is clear by the above convention that as jews assawted the previous prophets (A.S),they also teased the Holy Prophet (PUBH) . conspiracy with the help of enemies , guasdianship of double faced foes the gustful duble faced foes, the gustful vist of huyye bin akbtab and Aslam bin Akhtab, the conspiracy to kill the Holy prophet (PUBH), (naouzbillah) to tease the compaines of Holy Prophet (PUBH) . the planning of invading during the battle of khandaq these all examples are before these all example are before us about the Jews and thair plans.

GUIDANCE OF HOLY PROPHET (PUBH) THROUGH THE ANGLE

According to this narration it is clear that the Holy Prophet (PUBH) prayed to Allah to get our of the pain of mag ic and Allah informed him through the angeles.