CAN THE GIANTS ATTACK ON HUMAN 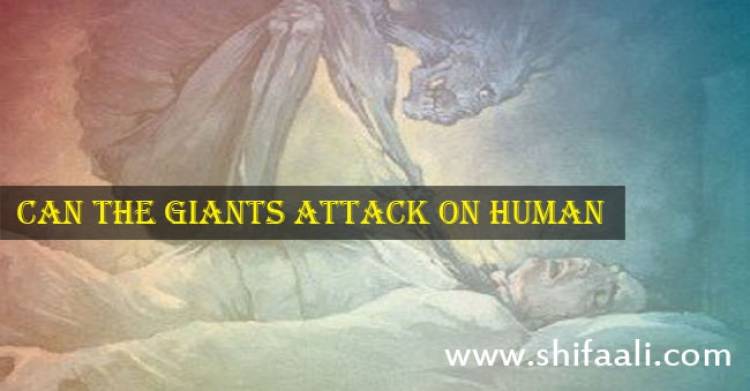 CAN THE GIANTS ATTACK ON HUMAN

Some people say that we don’t refuse about existence of giants, but when they listen that someone is under their attack, or is being affected by some action of giants they don’t believe and consider it a lie, deception, retreat or any psychological disease. They think that person is trying to achieve their any specific goal or to fulfill any wish. Some people do this so that they could get rid of any duty which someone put upon them to complete. According to such people also do such drama to hide their negligence. Children’s do this because they are afraid of upcoming exams. Some people see anonymous and different types of faces or shapes because they are under some psychological pressure or disease. Some persons have very fast and strong imagination power that they imagine some sort of unseen creature and that imagination becomes a strong part of them and they start seeing them in their real life. Some people see such things they are in their puberty periods. But in real life they don’t harm you, giants can’t take hold of a man neither they face epilepsy or fits.

We want to clear this that if any giant disturbs then it is a occasional problem it is not a burdenous so that we find this in Quran or Hadith. If there are thousands of people who complaint about such problem then we should treat them rather than convicting them of speaking lies. And if thousands of them complaint about this and they get rid of such problems after spiritual treatment then we have to believe this that such things have existence. When any healer uses nay Dua or Ayaat from Quran to treat any victim of Giants and people get healings from this it means this is the right way to treat that person who is feeling fits. This is reason people get heal after spiritual treatment.

Although giants and their fits are occasional problem not a burdensome (sharai) problem we will try to prove the existence of giants is real under the light of Hadith and Quran. Same like the people who such things like giants fit or any problem created by giants, hearing the voice of giants or taking any person out of his senses is also based on reality.

Sora Al Bakra verse no. 275 Imam Qartabi (R.H) narrates in his Tafseer regarding this ayat. He writes “ In this ayat those people are proven wrong who refuse that giants cant enter into any persons’ body.”

“On the day of judgment some people will rise like they devil has make them mad means they are under the control of any exorcize.” Tafseer Tibri (110/3)

The meaning of the verse written in Quran is taken as “ Like Satan has made them mad after touching them” it means that they are under giant fit.

“ The view of Ahl e Sunnah is that exorcism and giants enter in the body of human” (Majmua alfatawa la bin Tayamia) Abdullah bin Ahmad (RH) son of Imam Ahmad Bin Hanbal (RH) says that one day someone asked my father that some people say that giants don’t enter into a man’s body then father replied that those people are speaking lies. This (Giant) is speaking that time in theirslef.

It is found on various places in ahadith but here we will discuss only a few incidents in which Prophet (PBUH) himself took out giant from peoples.

Prophet (PBUH) took out giant from a child.

Hazrat Abdullah Ibn Abbas (RZ) narrates that a woman approached to Holy Prophet (PBUH) with her child and told that child feels giant fits at the time of breakfast and dinner and thus our meal is ruined. Holy Prophet (PBUH) stoked his hand politely in the chest of child and prayed for him in result that child vomited and a dog’s puppy came out from tummy of child and ran away. (Masand Ahmad, Masand Darmi,Dalaail al nabuwah la abi naeem, dalail al nabuwah lil behqi.)

Giant also enters in human body, according to a hadith they circulates with human blood. We also have quoted the narrations of Imam Abu al Hassan Alashari (RA), Imam Qartabi (RA), Imam Ahmed bin Hanbal who considered it the faith of Ahl e Sunnah that giant can enter into a human body.

According to ahadiths which we have quoted it is clear, and the reality is also that giants enter in human body as we also have quoted that what Hazrat Abdullah ibn e Abbas (RA) narrated about the child from whose tummy a dog puppy came out. And in second Holy Prophet (PBUH) talked with giant “O enemy of ALLAH get out from him” This is the reason we say that giant enters in human body.

“In the name of ALLAH, I am obedient of ALLAH, enemy of ALLAH get out from his body”.

Hazrat Atta Bin Abi Rabbah(RA) narrates once Hazrat Abdullah bin Abbas (RA) asked me that if I want to see a woman blessed with paradise.? I said Why not. Hazrat Abdullah (RA) replied this black woman approached Holy Prophet (PBUH) and said that she gets fits and after fits she loses her consciousness and sometimes his body also becomes naked on some places and she asked for prayers for her so that she should get rid of such incidents.

Holy Prophet (PBUH) replied, “ Be patient and get a place in paradise in return otherwise I will pray to ALLAH and you will be healed.”

When she listened about paradise she forgot her all pains and said Holy Prophet (PBUH) I will accept to remain patient and asked for prayer because she is unveiled after those fits then Holy Prophet (PBUH) prayed for her betterness. (Sahi Bukhari, Sahi Muslim)

Hafiz ibn e Hajar Asqalani (RA) narrates that her name was Umm e Zafar and she was getting such fits due to giants not from any mental disease. (Fateh Albari)

After reading all these narrations it is clear that 1)Giant Shadow is an open reality and occasional truth. Considering it a psychological disease is a ungraceful act of making the people happy who don’t believe in this. Second is this that when giant enters in a human body he teases that person.

In all above narrations form the Ahadith of Holy Prophet (PBUH) ordered the giant to “Get out of the human Body”.